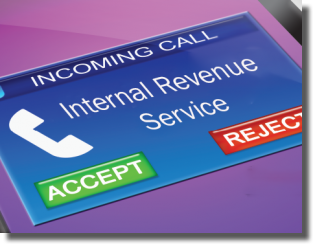 Scammers and cyber thieves continue to use the IRS as bait. The most common tax scams are phone calls and emails from thieves who pretend to be from the IRS. Scammers use the IRS name, logo, fake employee names and badge numbers to try to steal money and identities from taxpayers.

Taxpayers need to be wary of phone calls or automated messages from someone who claims to be from the IRS. Often, these criminals will say

taxpayers owe money and demand payment right away. Other times, scammers will lie to taxpayers and say they’re due a refund. The thieves ask for bank account information over the phone. The IRS warns taxpayers not to fall for these scams.

Below are several tips that will help filers avoid becoming a scam victim.

IRS employees will not:

If taxpayers don’t owe or don’t think they owe any tax, and they receive an inquiry like this, they should:

In most cases, an IRS phishing scam is an unsolicited, fake email that claims to come from the IRS. Some emails link to sham websites that look real. The scammers’ goal is to lure victims to give up their personal and financial information. If the thieves get what they’re after, they use it to steal a victim’s money and identity.
For those taxpayers who get a phishing email, the IRS offers this advice: